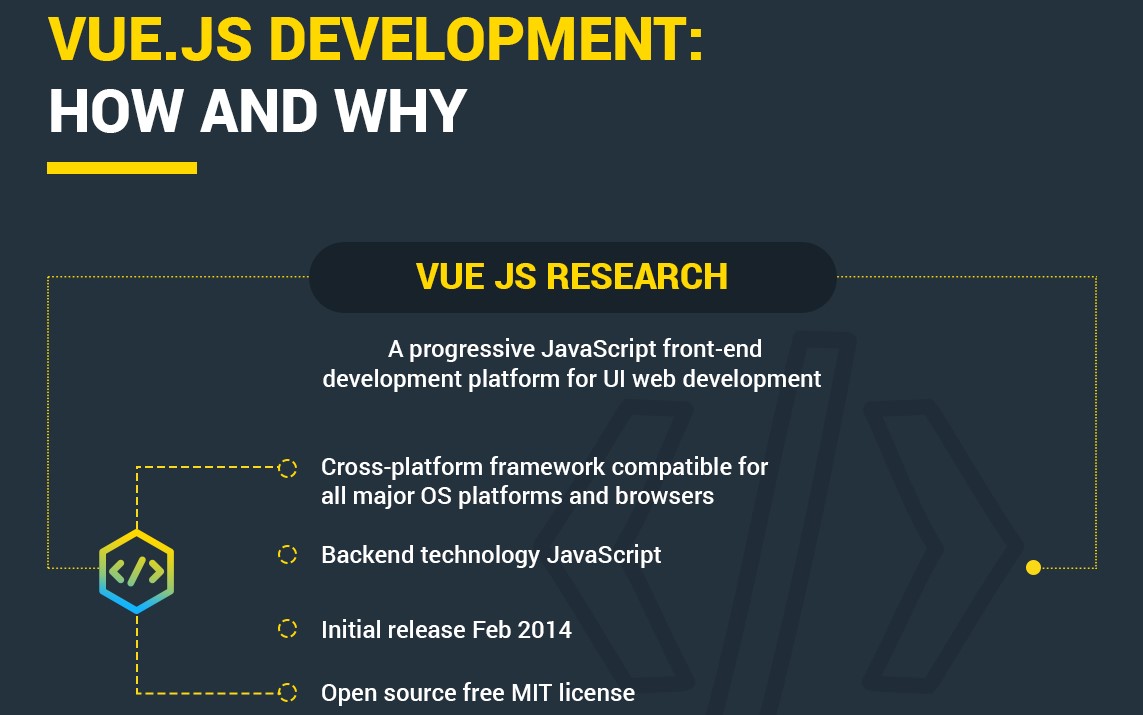 kostas maniatis in News 3 years ago

Vue.js took the IT community by storm right after its initial release back in 2014. Gaining traction like no other, the framework has already surpassed React.js (a Facebook-backed framework) by GitHub mentions - as a result, the number of developers considering Vue.js for their next web project grows continuously.

Having said that, the framework has a long way to go to beat its main rival to the market. It’s not as widely used by software engineers - thus, the demand to hire Vue.js developer is relatively high in the industry today. From this point of view, Vue.js is exactly a framework a beginning front-end dev should start with.

In order for a developer to know why he needs to learn Vue.js, it’s important to understand in which cases the framework is superior to all the alternatives presented. There are but a few Vue js examples where the framework is a developer’s safest bet.

When a development company needs to validate the product, there’s no need to put too much time and thought into building advanced front-end. Mainly, a Vue.js developer should be able to showcase a few essential features or present the page layout. Here’s why Vue.js does an amazing job at that.

Single-page applications are another popular way to use Vue.js. The framework does an impressive job of building powerful interfaces. It has essential flexibility to allow developers to express the code in a different way. An app built with Vue.js can be run directly from a browser - this increases the speed of testing. Also, if an application is built on JS, it can be easily integrated with Vue.js. This means, a developer doesn’t necessarily need to build a new application if he wants to use Vue.js - he can alter an existing one as well.

As a progressive and rapidly developing framework, Vue.js is a perfect fit for projects with a rapidly growing user base. Needless to say, there isn’t a particular type of services the framework favors - it’s been used by retailers (Alibaba), web extensions (Grammarly), social media platforms (Behance, Facebook), and streaming services (Netflix).

Being a part of such projects as Facebook’s Newsfeed, Vue.js has proven its maturity when it comes to high-level scalability and performance.

Why Vue.js is the first framework to master while learning front-end

On StackOverflow or Reddit, it’s easy to come across developers naming Vue.js a go-to choice as a first front-end framework. Still, the main suggested choice for beginners is Query.js.

However, as it seems over the last 4 years, Vue.js might actually be superior to Query in terms of simplicity. Here’s why the framework is a real deal for beginning front-end developers.

Compared to other frameworks, the implementation process in Vue.js has been simplified to the highest extent. For one thing, there aren’t as many concepts to be confronted with right off the bet (node selection, handling, callbacks, etc). With Vue.js, most of the above are encapsulated by the platform and don’t present a challenge for a developer.

2. A Vue.js file can be added to any webpage file

Instead of building an app relying solely on the framework, when it comes to Vue.js, the framework file can be uploaded to any SPA. Basically, if you know HTML or JS, learning Vue wouldn’t be as challenging as it can simply be complementary to one of the languages mentioned above.

Unlike many other frameworks that apply only if you have a big goal in mind (building a page or the entire app, for instance), with Vue js lifecycle, you can use a framework to handle small tasks, such as text input. Needless to say, writing an app using the framework is possible as well - a developer can do it as his Vue skills progress.

While a high Vue.js proficiency is among the main criteria for choosing a Vue.js developer, it’s not the only skill companies would love such a coder to have. Here’s the list of professional capacities a soon-to-be Vue.js developer has to master.

1. A strong command of JS and HTML

While Vue.js uses its own language for development, its logic and data building are similar to those of HTML and JS. Also, a developer might have to use Vue.js framework while working with JavaScript or markup directly - so, it’s expected of him to know the two most used front-end languages on an above-average level.

Component-based design is the logic shared by most front-end frameworks, Vue.js included. Looking forward to hiring Vue.js developer companies would expect a fit candidate to have a strong knowledge of the pattern, including its two most popular systems - Model-View-Control and Model-View-View.

A developer is expected to be capable of writing Vue.js apps end-to-end, it’s important to ensure they are stable enough before the release. This presumes a strong command of Vue js testing - mainly, running unit (evaluating isolated Vue.js components) and end-to-end (running all the code from start to finish) tests.

These include Typescript (a superset of JavaScript), WebPack (a module bundler used by Vue.js developers to config and debug their code), and Babel (a solution that allows improving the performance of the tool on older browsers).

Opportunities Vue.js brings to the market

Just as mentioned above, Vue.js is highly reliant on HTML, up to the point where a developer can use the framework directly to edit the markup code. That said, the framework is not just an addition to HTML - it makes the language more powerful by introducing its new features - such as a possibility to assign HTML values, classes, and manipulate them with an advanced data binding feature called v-bind.

Like any framework, Vue.js aims to increase code reusability to a level that wouldn’t be possible with native app development. Introducing a possibility to bing HTML-based, a Vue js template with virtual DOMs is where Vue.js went one step ahead. Globally, it means that developers are given a possibility to design front-ends for prototypes faster than ever and cut the total turnaround time for a project.

3. Attracts more developers to the market

Thanks to its simplicity, Vue.js will inevitably make it easier to start learning front-end development from scratch. In a couple of years, that can result in an increased number of front-end developers. It’s certainly good news seeing the IT talent shortage in the job market and the impressive growth-rate for the demand of the IT workforce.

Vue. js hasn’t been around for a long time. Some argue it has yet to define its unique scope, it may lack the number of versions, dependencies, or the code size. It’s clear, however, that the framework has enormous potential - otherwise, tech giants like Facebook, Alibaba, or Netflix wouldn’t have backed it up.

For beginning developers, Vue.js means a ton of unexplored territory, a chance to niche out in front-end, or as much as try their hand out in a new field. It’s easy to master, and the learning curve is not as complicated as that of other frameworks. There’s not one Vue js tutorial on the web as well as the growing demand. The framework clearly has a bright future ahead - it’s up to developers to become a part of it.